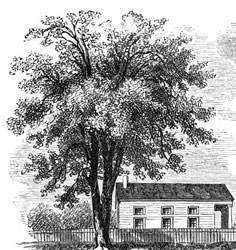 Edgeworth Borough is a community with a wealth of history. Over the past century Edgeworth has grown to become a premiere community in the Sewickley Valley. In Edgeworth we treasure our abundance and variety of mature trees, our interconnected sidewalks that link the neighborhood together, and the architectural structures that give our community its iconic charm. Our tree-lined streets and residences are cherished for both their aesthetic appeal and their welcoming character. Preserving our resources, both natural and man-made, is of utmost importance to the residents of our community.

As Surprising as it may seem, the person who inspired the naming of Edgeworth never stepped foot in the Borough. Edgeworth Borough was founded in 1904 and took its name from the Edgeworth Female Seminary, a small school for girls that had moved to our community (then called “Sewickley Bottoms”) from Pittsburgh in 1836. The Seminary was named for Maria Edgeworth, a well-known Irish writer of the period who was much admired by the founder of the Seminary, Mary Gould Olver. The seminary had an impressive curriculum and drew students from as far away as Tennessee and Georgia. Impressed by the natural beauty of the Sewickley Valley while on a visit Mary Olver decided to move her school to a setting where she could take advantage of the geographic and transportational advantages that the Sewickley Valley offered with both stagecoach and river transportation available to cities such as Pittsburgh, Cleveland, and Beaver. After the railroad was established in 1851, the stop, in the vicinity of what was to become Seminary Lane, became Edgeworth.

In the years following the Civil War, and particularly the period of 1870-1900, the availability of convenient railroad transportation made rapid changes in the economics, architecture, lifestyle and growth patterns of Leet Township and the Sewickley Valley. Local grist mills lost their importance as products could be distributed rapidly from large central mills. Perishables continued to be supplied locally, and farms were sustained in the center of what would become Edgeworth Borough. The Shield’s lands to the west of present day Edgeworth Borough completed the agrarian nature of the area even as an early commuter society was developing.

Local Transportation of the time was horse borne, and building a home was coupled automatically with a carriage house and stable. The burgeoning heavy industry of early Pittsburgh made that area less desirable as a place to live for those who could afford to commute, creating the growth impetus of Edgeworth. Communities nearest to the heavy industry became the centers supplying the man power that was essential to that industry. Edgeworth having no industrial pollution became the haven for the managers and professionals of early industrial Pittsburgh. A reputation soon followed that Edgeworth was an “upscale” residential area.

In neighboring Leet Township, increasing population slowly transformed individual horse ownership and cow herds from convenience to nuisance. Standards for early Edgeworth were required. Out of these needs arose the concept of Borough incorporation.

By the Turn of the 20th century, formation of a borough was inevitable, and active effort commenced in 1902, culminating in incorporation in 1904. It was not the large landowners of Leet Township who supported borough formation, as they were still able to sustain horses, servants and lifestyle; rather, it was the small service tradesmen making up the bulk of the freeholders. Listed were livery men, coachmen, blacksmiths, grocers, carpenters, janitors, gardeners, tinkers, tile setters, farmers, and drivers. On the other end of the scale were bankers, lawyers, doctors, brokers, architects, decorators, insurance and real estate agents, publishers and composers, engineers, and managers.

On April 27, 1903, Alexander Laughlin took a petition to the authorities of Allegheny County certifying that 101 of the 140 freeholders within the proposed new Borough of Edgeworth had signed the petition he had in hand. By February 9, 1904 approval was received, and it was decreed that the first election would be held on the third day of March 1904, between the hours of 7 a.m. and 7 p.m. Hence, the Borough of Edgeworth was born!

A Look Back in Time

Excerpt from the Pittsburg Leader July 31, 1904

Edgeworth, the latest aspirant for Borough honors, forms what is in all respects the Western part of Sewickley. Together with Glen Osborne on the east, the three form one continuous residence center that for beauty, taste, and desirability has not an equal in the greater Pittsburgh district.

Edgeworth has no business houses at all, save the Edgeworth Machine company plant that makes specialty of repairing automobiles of which there are scores in the three towns, a livery stable, two groceries, and two blacksmith shops.

The town is exclusively and strictly a residence center. Instead of artificial brick and block stone pavements, there are fine macadamized roads. On most of the streets are shade trees. All the places have grounds of liberal dimensions, there being no rows set close together. The abundance of greenery constitutes the chief charm of Edgeworth in the eyes of the lover of nature. There is a great beauty and diversity in the ornamentation of private grounds, some of the finest flowers and shrubbery to be seen in Pittsburg being there. Most of the people own their own homes, which accounts in no small degree for the beautiful appearance they make.

There is much building going on at present, particularly on the Way property. The houses, while none of the expensive ornate kind, rent for about $60 a month. Rents are as high in Edgeworth as in Pittsburg. A great tract of the Thomas L. Shields estate embracing 40 acres and extending from Shields Station to the Beaver Road is to be put on the market and sold as lots. This adjoins Edgeworth on the West. The lots, however, will be of liberal size and will not detract from the beauty of the suburban district.

Many newcomers are seeking homes in Edgeworth and Sewickley, people who wish to get away from the dust and turmoil of the city and from street cars and enjoy a little idyllic peace that is so hard to find in this rushing world.

In 1914, Edgeworth Borough became the first municipality in Pennsylvania, and the 14th in the United States, to adopt the borough manager-council form of government. This new system established the office of borough manager. The holder of the salaried post was to assume all administrative functions. Today over 55 percent of municipalities nationwide use this system of government. Edgeworth has had 10 managers in its history, currently being served by John F. Schwend.